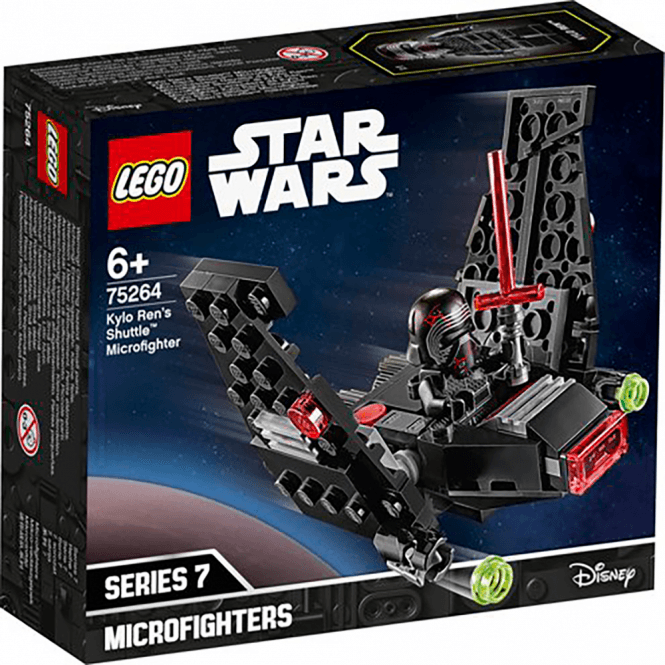 Code: 75264
Item in Stock Item out of Stock |
Loading...
Ask A Question
Email A Friend
Add To Compare

Open up a galaxy of adventures for young kids with LEGO® Star Wars™ Kylo Ren’s Shuttle Microfighter (75264) from Star Wars: The Rise of Skywalker. The quick-build Star Wars shuttle has foldable wings for flight and landing modes, plus 2 stud shooters for battle action.

A minifigure of iconic Star Wars character Kylo Ren with a Lightsaber for role-play completes this compact, collectible building toy. Zoom, rotate and visualize! Instructions PLUS are available via the LEGO Life App! Kids canzoom in on, rotate and visualize the Star Wars Upsilon-class shuttle to guide the real-life building process, allowing even younger children to build independently. Awesome!

Kids will love playing the bad guy – piloting the shuttle, adjusting its wings for flight or landing mode, and attacking the Resistance with 2 stud shooters and the Kylo Ren minifigure's Lightsaber!

Kylo Ren has a new-for-January-2020 helmet (with cracked decoration) andhis own Lightsaber, and there are lots of LEGO® bricks to inspire young fans to build creatively with other LEGO Star Wars™ sets.

This buildable 72-piece playset makes a cool birthday gift for boys and girls aged 6+ to introduce them to LEGO® Star Wars™ action. Add the 75263 Resistance Y-wing Microfighter for First Order vs. Resistance battles.

No batteries required! This buildable toy playset is powered purely by free-thinking creativity, so children can let their imaginations run wild and the action never stops!

LEGO® Star Wars™ building kits open up a galaxy of adventuresfor kids (and adult fans) to recreate Star Wars saga scenes and make up their own stories… or simply show off the collectible build-and-display models.

No need to use the Force to connect or pull apart LEGO® bricks! Ever since 1958, they have met the highest industry standards to ensure that they fit together perfectly and with ease. LEGO® bricks and pieces are tested in almost every way imaginable to make sure that every building set meets the highest safety standards on planet Earth (and in galaxies far, far away!).