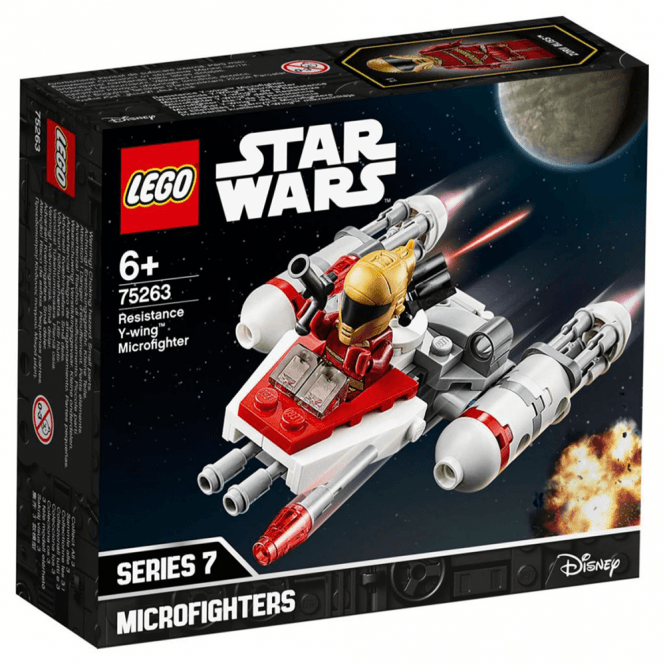 Code: 75263
Item in Stock Item out of Stock |
Loading...
Ask A Question
Email A Friend
Add To Compare

Give your youngster an inspiring introduction to LEGO® Star Wars™ construction toy playsets with this easy-to-build Star Wars: The Rise of Skywalker Resistance Y-wing Microfighter (75263).

Featuring a new-for-January-2020 red and white color scheme, the Y-wing fighter also has flick missiles and a rotating gun turret for battle action. Kids can also role-play as a heroic Resistance pilot with the Zorii Bliss minifigure. Go digital! #

This building toy is a great gift idea for young LEGO Star Wars fans and Instructions PLUS, available in the free LEGO Life app, offer an exciting, interactive way to build it. With zoom and rotate viewing tools to help them, even rookie builders get a feeling of independence… and Jedi-level awesomeness!

Kids can role-play battles as Resistance heroine Zorii Bliss with this quick-to-build LEGO® version of the Resistance Y-wing Microfighter (75263) from Star Wars: The Rise of Skywalker!

This LEGO® brick Microfighter version of the Y-wing is ready to fight the First Order! It's got 2 flick missiles, a rotating gun turret, guns (non-firing) and a cockpit for the Zorii Bliss minifigure.

The buildable Y-wing model's color scheme and Zorii Bliss's helmet are both new for January 2020, and there's plenty to inspire young Star Wars™ fans to play creatively and combine with other LEGO® Star Wars sets.

Easy to build – and to rebuild after battles against 75264 Kylo Ren’s Shuttle Microfighter – this 86-piece Y-wing Microfighter construction playset makes an ideal birthday or surprise gift for boys and girls aged 6+.

This compact and robust LEGO® Star Wars™ Y-wing fighter measures over 1” (3cm) high, 4” (11cm) long and 3” (8cm) wide – a convenient size to slip into a child's backpack ready for play wherever they go.

No batteries are needed with this kids’ construction toy – it’s built purely from LEGO® bricks and powered by children’s imaginations so the action never stops. Make building even more fun for kids with digital Instructions PLUS. Using the LEGO® Life app, even younger builders can zoom, rotate and visualize this construction model as they build the real-life version… Awesome!

LEGO® Star Wars™ sets are fantastic for kids (and adult fans) to recreate scenes from the Star Wars saga, make up their own stories and display the collectible construction models.

Ever since 1958, LEGO® bricks have met the highest industry standards so they are robust and connect and pull apart easily every time – no need to use The Force!

At the LEGO Group, we drop, heat, crush, twist and analyze LEGO® bricks and pieces to make sure that every building set meets the highest safety standards on Earth (and in galaxies far, far away!).